How To Do Ventriloquism (With Pictures And Video) 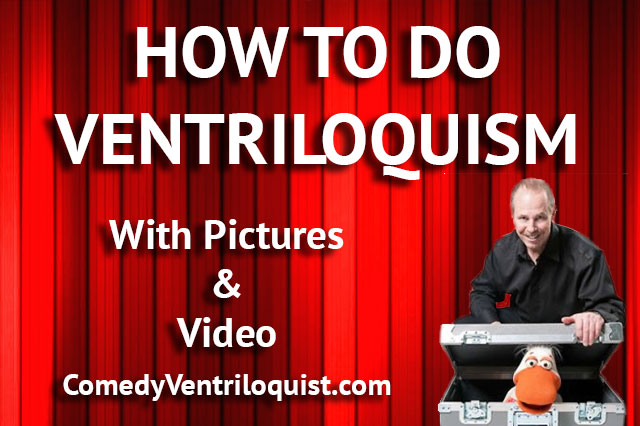 How To Be A Ventriloquist for Beginners.

Learn How To Do Ventriloquism The Right Way!

If you want to be a good ventriloquist, we can help. Just follow these tips and how to instructions provided by professional ventriloquist Tom Crowl.

The art of ventriloquism is about creating the illusion of life. So what does it take to be a good ventriloquist?

How To Throw Your Voice:

You can’t really throw your voice. The human ear can not tell where sound is coming from. It must coordinate with your eyes to determine the direction of sound.

When you watch television, it appears as if the actors on screen are talking. The sound is actually coming from the speakers. Because your eyes see the actor’s mouth moving, your brain tells you that is where the sound comes from.

Ventriloquism used this technique long before television. If the eye sees the puppet’s mouth moving, the brain buys into the illusion the sound comes from the puppet. This is a big part of what makes ventriloquism work.

How To Talk Without Moving Your Lips:

When air passes over the vocal chords, it creates sound. Based on the way you manipulate the air flow, you create the human voice. Most people allow the sound to emerge from their mouth in a regular speaking voice. As a ventriloquist, you will manipulate the airflow in a different manner.

Hum for a moment. That is right, hum. Do you feel the vibration in your head? Try it until you do. That is a resonance. Now hum and hold the note. As you continue, open your mouth a bit. Did the sound get louder? It should.

How Air Escapes To Create A Resonant Voice

The moment you opened your mouth, the air had two paths to escape. It was still flowing through your nasal cavities, but now it could also emerge between your lips. That is one of the secrets of ventriloquism.

In my online ventriloquism course, the first free lesson covers breathing. Many beginners wonder why breathing is so important. When air escapes through two paths, your lungs empty much faster. Without enough air, your ventriloquist voice won’t be strong. Deep breathing is another secret of ventriloquism.

Once you understand the resonant voice, it is time to move forward. Now you will be:

Learning To Speak Without Moving Your Lips:

Before you can start, you must understand how to position your mouth. The proper ventriloquist mouth position provides a slight gap between your teeth. Your jaw should be open approximately 1/4″. Your lips should be slightly parted. This will allow the airflow to escape.

It is important not to lock your jaw in this position. That can cause pain and problems over time. There is no short cut for learning not to move your lips when you talk. It takes time and practice.

How To Keep Your Lips From Moving:

These techniques will help you feel when your lips move. If they do, practice what you are saying over and over until your lips do not move.

Saying The Alphabet Without Moving Your Lips:

With your mouth in the proper position, try to say the alphabet. You will notice you have a problem with a few letters. The letters most ventriloquists have problems with are “B”, “F”, “M”, “P” and “V”. These are the labial letters. Chances are the letters “Q” and “W” gave you some problems too.

As a ventriloquist, you will need to pay attention to how sounds are made. Here is an example. Say the word “Quick.” How did the “Q” sound? It made a “K” sound didn’t it? Say the word again. When followed by the “u”, the sound of the word starts with “Koo-ick”. You can say “Quick” without moving your lips.

Here is another of the secrets of ventriloquism. Any time you have trouble saying a word without moving your lips, break it down into syllables. Practice how each syllable sounds and then put them together again to say the word.

How To Say The Labials Without Moving Your Lips:

Most how to ventriloquist lessons offer poor solutions for the labials. For generations, ventriloquists were taught to use substitutions. You will read ventriloquism instructions that tell you to substitute “D” or “geh” for the letter “B”.

Do you have a voice recorder? Try saying “The Doy Dought A Dlue Dicycle.” Now play the recording back. Does it sound anything like “The Boy Bought A Blue Bicycle”? No.

Other instructions suggest the substitution of “N” for the letter “M” and the letter “T” in place of “P”. It is no wonder people who have never had correct instruction in ventriloquism are so confused. These substitutions don’t make sense and do not sound right.

Tom covers modifying the substitutions to pronounce the labials properly in his Learn-Ventriloquism Course. Here he provides the basics of creating these changes. With plenty of practice, you will be able to create these modifications. To shorten your learning curve, you can always sign up for Tom’s online virtual ventriloquism course.

By changing the way your tongue contacts the roof of your mouth you can modify the sound created.

Each of these labials has similarities. When you say the substitution “D”, notice how your tongue hits the roof of your mouth. Now begin to change how the tongue comes into contact with the top of your mouth. Instead of where it did hit, move it forward so it contacts the ridge right behind your teeth. The sound changes. Keep playing with this. It takes time, but you will eventually get a “B” sound. Record it to be certain. Our voice sounds different when played back. Make sure you get the proper labial sound.

How To Say “F” and “V” Without Moving Your Lips:

The letters “F” and “V” are close cousins. Say these letters and you will notice your teeth connect with your bottom lip. So the same substitution is used to create the sound. For the letter “F” use “th” as in “Ethel”. For the letter “V” use the “th” sound as in “Then”. The sounds of the letters “F” and “V” may also be created by a push of air. Many ventriloquists find themselves using both methods. They alternate based on which method creates the best sound for the word they are saying.

The labials are the hardest part of learning to talk without moving your lips. The paragraph above gives you the technique to learn through practice. Lots of practice. But being a good ventriloquist like Jeff Dunham takes time.

We have covered a lot of material in this article on How To Do Ventriloquism. If you want to be a ventriloquist, now is the time to practice. For best results, practice for short periods several times a day. As a ventriloquist, your voice is your instrument. Don’t overwork it.

You can practice anywhere. In front of a mirror, when walking or exercising, driving a car, etc. It is important to practice daily. The best ventriloquists never stop practicing. It takes dedication to improve if you want to be a top ventriloquist.

Other Resources To Help You Learn Ventriloquism

Tom Crowl’s Learn-Ventriloquism OnLine Course:
Hundreds of ventriloquists have taken Tom’s virtual online course. Video and written how to instructions release daily. You can sign up for five free lessons to start.

Maher Studios:
Maher Studios is the gold standard when it comes to the art of ventriloquism instruction and education. If you are on a tight budget, check out the Detweiler Version of the Maher Course of Ventriloquism. The Kindle eBooks may are available for only $4.95 per lesson.

Maher Studios also offers advanced study materials. These include scripts and even a course on how to build a ventriloquist figure.

If you want ventriloquist comedy for a live entertainment event, contact Tom’s office.

If you enjoyed this article you may also want to check out the list of ventriloquists also available on this blog.

About Tom Crowl:
Tom is a full time professional American ventriloquist. His act performs at corporate, public and private events across the United States. Tom is the creator of the first virtual online ventriloquism course. Owner of Maher Ventriloquist Studios, Tom is also a co-founder and Executive Director of the International Ventriloquist Society. 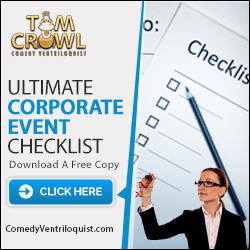 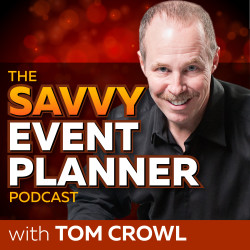